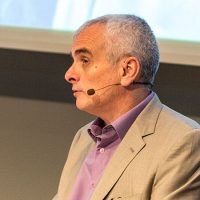 Jordi, you are a Barca fan from birth. It’s almost in your DNA one might say.

And the case we’re talking about today — you were presenting this journey, where Barca was in huge crisis, had huge problems, and it was a transformation.

Well, as you said it’s in my DNA and as you say everything that is about Barcelona I’m obviously interested. But the central thing is the idea, that many people believe that football, a sort of, you know, entertainment business. Everything is about chance. And about paying money and getting big players, and, you know ball running. The case was a very well planned and implemented transformation program by these guys in 2003. They created a holistic and integrated approach to what Barca had to be. From a social perspective, from a sports perspective, from a financial perspective, from a marketing perspective. It was really a program with a number or projects. Andf the motivation for that was not only that I loved Barca, but also that I love project management, and Barca makes a great example for how project management can be a tool for success. That was the main motivation for me.

The interesting thing was that the star was the vision, and you said “Barca is more than a club.”

Correct. The club motto was developed during Franco time to mean that Barca behind the sport, behind the football, was the Catalan identity, also the democracy identity, against the Franco regime. But Barca, in 2003, had to be transformed into something else. So the “more than a club” meant an international meaning for the club, that Braca would be a club with values, with strong ethical values, with a love for football. Best players but also best people. So “more than a club” meant something that is an identity — it’s a feeling it’s not only related to Cataln people but also world populations, and create a sense of, you know, friendship. A meaning of friendship, humility, fair play, and of course spectacular football. Quality product, quality customer experience. Barca means all that.

What happens within people when you start with a vision?

Well, what happens in general in many companies is that they consider the vision a statement, something that you simply pronounce. Then the rest will follow. the interesting case with Barcelona is that we developed this mission out of the mission statement. The mission was called “the virtuous circle” and that was instantly translated into a number of projects. that’s why I use this case to tell companies and tell businesses that they have to develop apart from mission statements they have to articulate missions that can be easily translated into programs and projects. That is a key factor for success with project implementation.

So, actually the how flows from the why. You start with a good why you get a good how. How did Barca go about translating that into how in practical terms?

Well, the executives themselves say that they rolled up their sleeves. They implemented fifty projects first year, escaping from egos, from hierarchy. The video play by Mr Mark Ingler who was vice president explained how hierarchies and egos were not relevant, the whole club had to be involved. I was just told by one of the attendees at the conference that the IKEA CEO spends time in the business to see what the customer experience is. This involvement by executives, far from being too hierarchal, I think is a great example that we get from Barcelona and also from IKEA.

Yeah, you have streams leading to customer value instead of going up to hierarchies.

It’s all around the customer experience. The position of course at some point is relevant because someone has to make the decision, but that thing is important not only in the sense of the customer experience, but that employees themselves… leadership  by example is what really works. If employees see leaders that they only give orders, that they order people around, that’s not the best motivation that exist.

Correct! When you see someone that is really working along with you and helping you. That is also suffering these things with you. That is the best example. That’s very old, you know. Alexander the Great used to that, many thousand years ago. He lead people almost to India, the country, but he always was the first in line. That’s the type of leadership for the 21st century. We don’t want bureaucrat leadership, we want involved leaders, ethical leaders. Because this is also something we learn from the Barcelona case, there’s principles like humility, like fair play, like respect for the adversaries. All those values will impregnate it. The whole project, the whole process. That’s very important. That’s the real motivator that’ll make people stay the hours, you know do the best. You know the success of Barca was unbelievable, and still many people believe it was the chance that the ball, you know, hit the net. But that’s not the case. Six championships out of six championships since 2009, and nothing was due to fortune or good luck. It was carefully planned, everything was carefully planned, and say ignited with this tremendous passion for what Barcelona conveys.

This is so interesting for what you painted so well in your lecture was the plan and the system built around values. So one question that would resonate in my mind: is there something that was top-of-mind in all this or is the secret really to create a system and balance the system?

Well, I think for me all this comes from an early education. That’s why some players had to be expelled. i do believe that you learn that at any age. At my age I’m learning a lot every day. To be honest, some of the principles or values that are key and important, in that Barcelona program, all that you learn from one day to the other, you need to be born with them. That’s why the football academy of Barcelona, La Macia, is so important. Because you are located in these values as a child, so players in Barcelona like Enesto, Messi, Chavi, Fabrigas and many others, they did learn the Barca style of playing, they were always talented, but also the principles and values. They were never abandoned for the rest of your life. That’s the key factor that balances the system. it was not written in papers, it was already there. So the merit, credit, of coaches such as Frank Reicher or Fabiola is high, it’s great, but it’s limited to their role, because the core values were already implemented in the minds of these people. What you need is coaches and project managers that lead by these values. You need those CEOs that get involved and they really help people, that are humble you know. those are the exemplary leaders for the 21st century.

Thank you, Jordi, so much for explaining the Barca system. And also showing the passion of Barca.